Gibraltar is pherhaps the most confusing place where I’ve already been. Near that beautiful turquoise bay and under that splendid sun that nevers stop shining, I would say I was in Spain if it wasn’t the case that I was surounded by union jacks waving and remembering me that I was actually in a british territory. Also, when I was attentively admiring the wild monkeys at the Gibraltar Rock, I instantly teletransported myself to Africa until I looked around and realised again I was in Europe. In Europe? If so, why is Africa just over there, in the horizon? But when you thought that it couldn’t get any more confusing, notice than when I was looking at Africa, I was not looking at Morocco, as it would be expected. In fact, I was looking at Spain, which has an enclave on the other side of the strait, the city of Ceuta.

I know, I know, it’s hard to understand and even harder to imagine a place like that, but, trust me, there is no better way of doing it than visiting this charming city located under the protective shadow of the Gibraltar Rock, which imposingly guards the entrance of the Mediterranean Sea since the beggining of times. If you only have one day to explore Gibraltar, don’t freak out because I have you covered! So, here is everything you have to do before you can say that you have already seen Gibraltar:

Unless you reach Gibraltar by boat, you have no other way of getting to Gib, as locals like to call their city, without crossing its airport runway, either you do it by foot, taxi or bus. Ranked as one of the most dangerous airports in the world, Gibraltar Airport is also one of the most unique because it’s the only one that is crossed by a road, the Winston Churchill Avenue. C’mon, how cool is that? If you are lucky, you might even spot a plane landing or taking off right in front of your eyes.

Casemates Square is Gibraltar’s most beautiful and important plaza, as well as its main social center. Between the many busy shops and inviting restaurants, you will find Gibraltar Crystal, where professional glass-makers will show you for free how to make colourful crystal vases, cups and jars out of nothing. Then, you can admire some of their best art works, true masterpieces, I would say, in the adjoining shop.

3: Stroll along the Main Street

The name of this street speaks for himself: Main Street is the most important artery of Gibraltar, translating the spirit of this place like no other because of the perfect combination between british elegance and relaxed mediterranean vibe. Strolling along it and windowshopping is a true delight. On Main Street, you will also find the Catholic Cathedral of Gibraltar, the Governor’s Residence and the Trafalgar Cemetery, the loveliest cemetery I have ever seen. Okay, this was bizarre!

4: Catch a cable car to the top of the Gibraltar Rock

From the the top of the Gibraltar Rock, you can have the best views in the entire area and if you want to arrive there in style, there is no better way of doing it than by cable car. It might not be very cheap but it’s totally worth it because that fantastic view over Gib, Algeciras Bay, Costa del Sol, Gibraltar Strait and Africa has no price. Don’t forget to bring confortable clothes and shoes, as well as a bottle of water because, if you want to explore the rock, you will have a lot to hike.

Gibraltar Rock is a true natural wonder, especially when speaking about wildlife and geological features. Going to Gibraltar and not seeing a Barbary Macaque is just like going to Rome and not seeing the pope. But be careful because, sometimes, they are not as sweet as they seem to be, attacking people and stealing food. St. Michael’s Cave shouldn’t also be missed if you want to experience the best Gib has to offer. 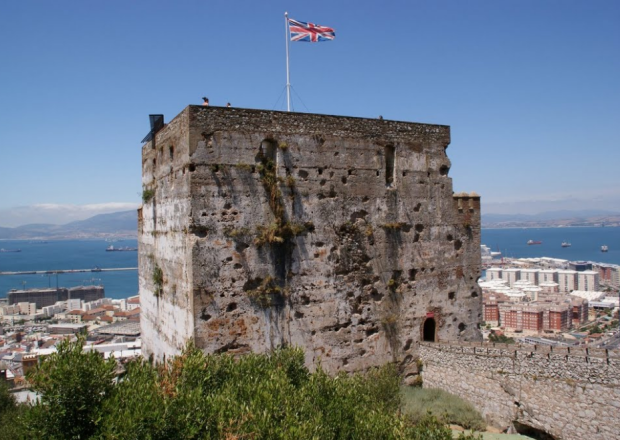 Changing hands between romans, moors, spaniards and brits several times, Gibraltar has a very rich past, which is reflected on its many interesting monuments. Spend some time exploring them! The ones I visited were the Moorish Castle and the Great Siege Tunnels and I’ve to say I really enjoyed visiting both, especially the Great Siege Tunnels because I had never saw anything like that before.

Have you ever been in Gibraltar? Do you want to? Tell me!