A Guide to Agrigento’s Valley Of Temples

Centuries before Sicily became part of Italy, it was part of Magna Graecia, ‘Great Greece’. Magna Graecia, which included not only Sicily but also Calabria, Campania, Basilicata and Puglia, was for Greeks what America was for Europeans: a land of oportunities that was colonised by them and soon became more powerful than their motherland. Syracuse became richer and stronger than Athens and other Sicilian city-states reached glory, such as Selinunte, Tauromenion and Akragas, nowadays known as Agrigento, a must see for all those who are visiting Sicily for the first time because of its impressive archeological park, the Valley of the Temples.

The Valley of the Temples is featured on the UNESCO World Heritage List and on the #1 New York Times bestselling book  ‘1000 Places to See Before You Die’ because there is literally no other place in the world like that. Not many other sites hold so many Greek temples and have them so prefectly preserved, what makes this place trully unique. So, what are you waiting for to add this place to your to go list?

This article will feature:

– Tips and personal recomendations on visiting the Valley of the Temples

– The nearby white cliffs of Scala dei Turchi

The first temple you will find after entering the archeological park is the Temple of Juno, also known as the Temple of Hera Lakinia, the third one being erected in the Valley of the Temples after the ones dedicated to Heracles and Olympian Zeus. Vestiges of the fire set by the Carthaginians after the Siege of Akragas of 406 BC can still be seen in the interior of the doric temple. Next stop: the Temple of Concordia!

The Temple of Concordia is by far the highlight of Agrigento and it really deserves this honor. It’s simply impossible not to feel breathtaken when you set your eyes on its symmetrical golden marble columns. The Temple of Concordia is the world’s best preserved doric temple, along with the Parthenon of Athens, and you probably recognize its façade from the UNESCO’s logo, in which it was inspired. Its fantastic conservation state is due to the fact that it was converted into a christian basilica during the 6th century. That’s why so many tombs can be seen around the temple.

The Temple of Concordia has the amazing power of making you travel in time to Ancient Greece. From one moment to another, you find yourself imagining men and women with white tunics and leather sandals discussing politics and philosophy while slowly strolling along Akragas, always with their eyes fixed on the blue infinity of the Mediterranean Sea, the perfect backgroud for such a beautiful labyrinth of whitewashed columns and fragant altars. 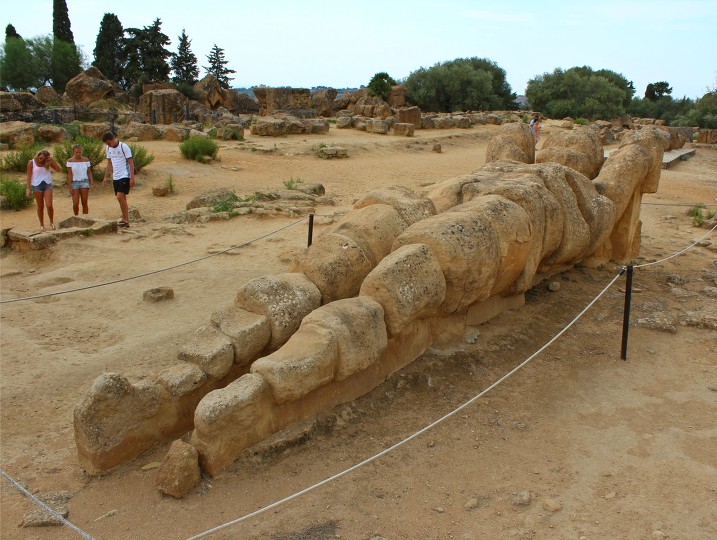 Even though it was never completed and is now ruined, the Temple of Olympian Zeus was the largest doric temple ever built and for sure one of the biggest constructions of the Ancient World. Today, only its foundations can be seen, as well as a couple of atlantes, colossal human-shaped columns that were once part of the temple’s structure. The picture above depicts one of the existing ones.

Temple of the Dioscuri: 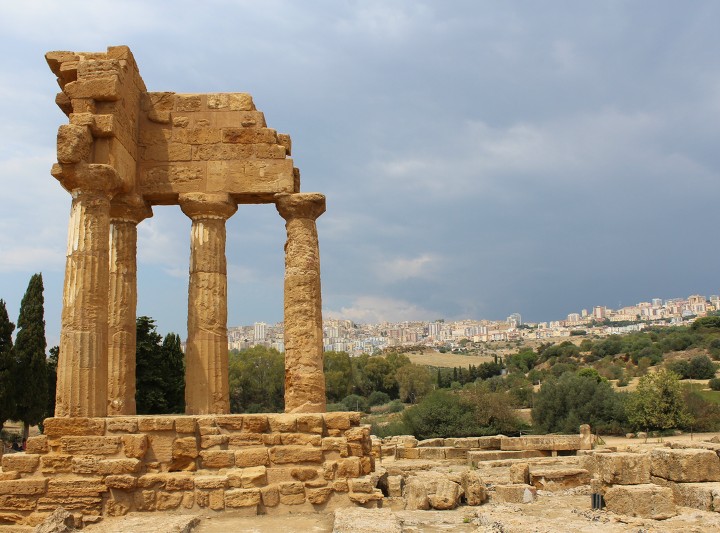 Last but certainly not least comes the Temple of the Dioscuri, the name commonly given to the mythological twins Castor and Pollux. It’s the symbol of the modern city of Agrigento and what can be seen today is due to the works of Mr. Alexander Hardcastle, who used pieces from various nearby ruined temples to reerect this one.

Even though those are the highlights of the park, there is much more to see beyond them. Other less known temples such as the Temple of Vulcano and the Temple of Asclepius can also be seen, as well as some Roman, Byzantine and Medieval ruins. Near the Temple of the Dioscuri you can also find the Kolymbethra Garden, a traditional garden emanating orange and lemon fragrances that ocupies an area in which there was once an huge and sumptuous tank constructed by the Greeks. The Archeological Museum might also be worth the visit if you are interested on learning how life was like in Akragas and on seeing some old artifacts.

The archeological park is huge and there is a lot to see there. So bring confortable clothes and footwear because there is a lot to walk. The area is very dry, especially during the summer, so you really should pack a bottle of water. Also in the summer months, the Valley of the Temples can be visited during nighttime, when the temples are illuminated and the scenario gets even more enchanting and marvelous.

The nearby white cliffs of Scala dei Turchi:

The area around the Valley of the Temples has a lot to keep you entertained. The town of Agrigento is a charming and dinamic place with a lot to see and experience but my favorite nearby place is Lido di Scala dei Turchi, ‘Beach of the Staiway of the Turks’, which has recently jumped to the spotlight because of its romantic white stairway-shaped cliffs and pristine waters. The beach is located  14 kilometers away from the Valley of the Temples and it’s named like that because moorish pirates, which were commonly simply called turks, used to land at this very beach and climb its cliffs to attack the nearby towns and villages.

I hope this guide was useful. Now I wanna know what you think about it.